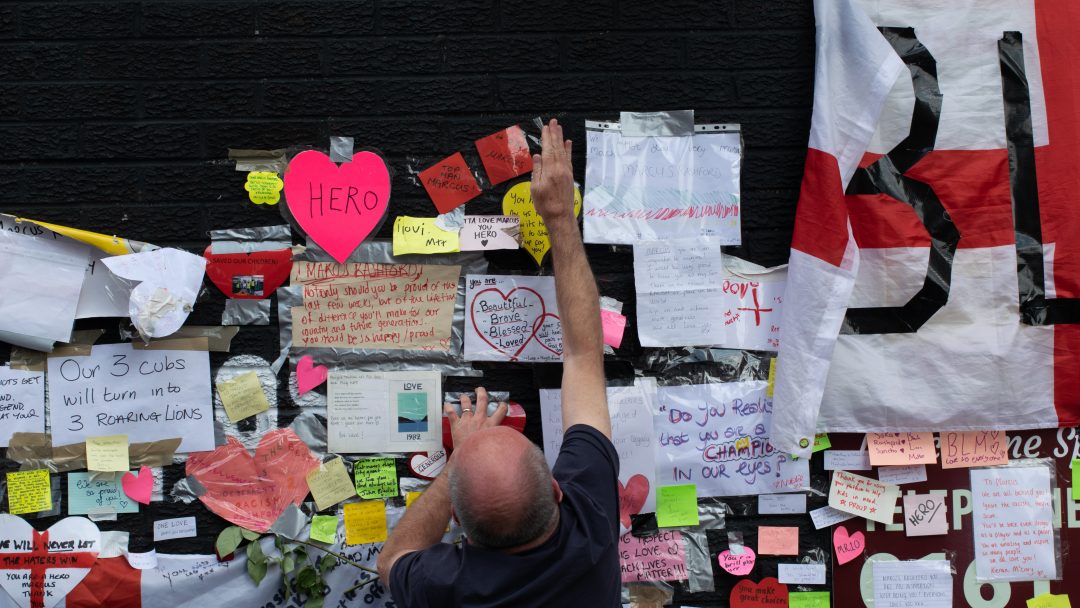 As the pandemic was gathering steam in March of last year, Manchester United and England star Marcus Rashford quickly rose to national treasure status after successfully campaigning to have food delivered to children no longer receiving free school meals. Within months, global fashion brand Burberry had partnered with Rashford on a series of initiatives to help disadvantaged young people, featuring him in a campaign and unveiling a commemorative mural in his hometown, Manchester.

While both are British icons, Burberry is defined by its heritage whereas Rashford epitomises modern Britain. And therein lies the crux of the story here: this was all part of a push by Burberry to attract new customers after a sales slump in 2020. The move seems to have worked – Burberry’s share price is up 7%, its highest level since before the pandemic, but the true test of its authenticity will be Burberry’s demonstrated commitment to the cause and its renewed interpretation of what it means to be British. Per Douglas Holt’s definition, responding to societal shifts by offering a resolution is a fundamental principle of cultural branding.

The halo effect is a powerful cognitive bias that presents brands with an opportunity to leverage strategic partnerships by improving impressions of their businesses through associations with successful or favoured companies, ambassadors or symbols. Big brands increasingly look to challengers, influencers and emerging trends to stay nimble and current, and establish cultural resonance. Barclays even created its own fintech accelerator, Rise, supporting ‘cutting-edge start-ups and scale-ups’ to ‘connect, create and scale their businesses’, with success stories such as Flux and Pluto Money.

But cognitive bias goes both ways, and partnerships carry a serious reputational risk.

Just this month, brands rushed to publicly part ways with influencer David Dobrik after allegations against a member of his team emerged. But beyond sponsorships, Dobrik was himself actively involved in a number of business ventures, and was co-founder of one of 2021’s most hotly-tipped apps, photo-sharing platform Dispo (featured in a previous edition of Making Waves).

He stepped down from the board in the wake of the news, but by then investors had already made the decision to sever ties with the start-up and its founder. This included venture capital firm Spark Capital, which led its Series A funding round, which stepped down from the company’s board and went as far as to make ‘arrangements to make sure we do not profit from our recent investment in Dispo.’

The incident shed light on the volatility of brands built around one influencer or personality, but also acted as a perfect example of the pressures modern companies are under to align all business activity, partnerships included, with their wider mission and value statement, and re-evaluate these relationships as they evolve and the news cycle moves on.

The failure rate of strategic alliances is comparable to that of marriages, yet history tells us that when they work, both partners can win big. Some of the greatest partnerships are borne from a willingness to take risks, and an ability to be discerning about the kind of criticism that is worth enduring. If progressiveness is inherent to your brand, what is the harm in losing the approval of old-fashioned thinkers, particularly if it means winning the hearts of the customers you sought to appeal to? Nike’s “gamble” on Colin Kaepernick is perfect evidence of this. Despite an attempted boycott against the brand, the Dream Crazy ad featuring Kaepernick won an Emmy, Nike’s stocks increased by 5%, and Nike demonstrated true authority and commitment to its purpose.

So what are the lessons for brands here?

A partnership is only effective if it makes sense. The contrast could be the appeal (think Gucci and The North Face), but at the very least there should be a common goal or shared value connecting the story. Lego’s 2011 partnership with oil giant Shell led to a public outcry, with consumers questioning Lego’s social and environmental values, and the contract was terminated in 2014. Equally, modern consumers are attuned to tokenism and greenwashing, and that accusation is in itself potentially detrimental, so hopping on the bandwagon won’t cut it.

The best partnerships inherently are those that mutually benefit both parties, and that is most achievable when the benefits or commonalities are clear cut. It could be as simple as a shared brand symbol – as part of Lacoste’s partnership with IUCN Save Our Species, it launched a line of limited edition polo-shirts featuring ten threatened species in place of its iconic crocodile logo, to drive awareness. The viral campaign won ten Cannes Lions Advertising Industry awards, the shirts sold out in 24 hours, and visits to the Save Our Species website soared.

Do your homework. Then do it again.

To quote The Social Network, the Internet’s not written in pencil, it’s written in ink. There are few excuses for blind spots and uneducated decision making in 2021. We’re at a place now where you can retrace a partner’s digital footprint and backdate their activity. It’s not comprehensive, but it’s pretty close.

Look at what the data tells you – source information about historical campaigns, decisions and stances on social issues, and question what that means in the context of the current culture, to ensure that you really know who you’re entering into business with. If you’re fearing information overload, look to technology solutions that help you cut through the noise and draw out the meaningful insights to make an informed choice.

Elements of a brand will remain constant, but it’s as important to evolve in-line with the changing world around us. Symbols, references, trends, and language are all at risk of becoming irrelevant, dated or, worse, tone deaf. And trend reports, predictive intelligence and digital monitoring enable brands to anticipate risks and be proactive in repositioning to avoid risks becoming reality.